Liz and I thought long and hard about what to call our stables, but settled on Happy Horse. It's simple and sums up what we're about.

Riding/ Lessons will be available  probably in 2020. The facilities have been delayed and we won't be able to do much without an indoor this winter. 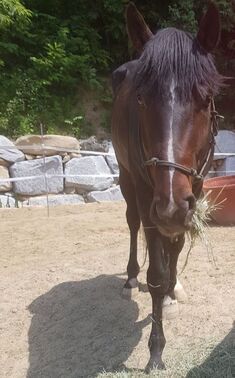 Panther is our fourth herd member.  His ad said he was imported from the United States, had fractured his shoulder blade, was still a stallion, but very kind.  He was probably a body score of 2 when we first saw him and that's being generous.

He is very sweet and kind, has gained a lot of weight.   We're  perhaps too optimistic that he'll give us one baby out of Thunder before becoming a gelding. But seeing as how he's more of a gelding than our geldings, we probably have a better chance of being struck by lightning. As of writing this we've had him about two months. His personality hasn't started to show up yet so I can't really describe him like the others below.  he does eats the biggest mouthfuls of hay. Also, he hates bugs. 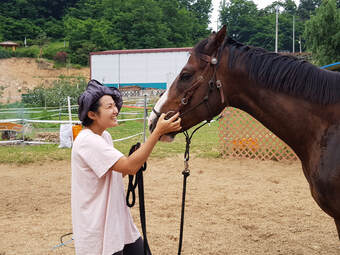 He is the third member of our equine family. He retired from racing in March 2018. He raced three times, but won nothing. Our feed man sent us his picture and told us he was big, but we initially turned him down because it was so cold, we had to warm the water for the horses to drink... a pot, a wood fire and buckets of water carried from the pond. A few weeks later the weather warmed up and we asked about him. The company who owned him wanted to run him one more time (his third race) so we almost didn't get him. But lucky for us, he was a complete failure on the track.

His favorite things include watching us with a puzzled expression, dropping his dingle-berry when you pet or rub him, and people. Despite being herd leader, he is always the last one to know if there is anything to look at. Super, Thunder and now Panther will stand with their heads up. Thor notices five minutes later, Thor says, "Did I miss something?" 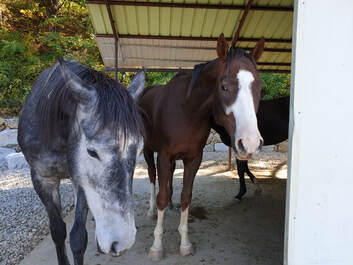 She was the second horse to join family. She was retired from racing in early December of 2017. Her race owner paid equivalent of $80,000 USD when she was a yearling and had high hopes for her. Fortunately for us, she refused to go faster than a trot in her two starts.

​In the beginning she had a death stare anytime you asked her to do anything she didn't want to do, but now she only grumps a little.

Her favorite things include napping, drinking water, baths, face scratches, more baths and blocking the road. If  truck, tractor or excavator can come in to do work she stands in front of it. If you lead her away, she comes right back. If it stays outside the pasture, she watches it (and the gate) with hope. 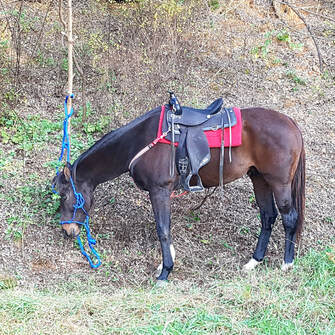 He is the first member of our equine family. He raced 12 times, 9 of which he won. But when they tried to move him up a class, he wasn't fast enough. So he was sold to a man who sent him to be trained in at the stables in Bongwha. At the time, the stables the training was quite rough on horses... they changed a lot by watching me so the horses aren't tied down to be saddled anymore, but we don't know how rough Super's training was. We do know that he was traded back to the training stables because he was too spooky. The trainers then tried teaching him to jump, but Super is a coward at heart and the fences got too high too fast. He crashed, one of the boys riding ended up in the hospital and Super's stifle was injured. You wouldn't know it today. He can walk , trot, canter and even do a bit of jumping, but he has limits so we don't push him past those. He has defended us from things he thinks might threaten us. He is still a coward, but he is especially protective of Gabe.

His pastimes include ear scratches, napping and rolling. However, his favorite thing in the world are butt scratches and will back around the pasture trying to get them as you clean manure.

Below are more horse photos. On a side note, my phone is always telling me to clean my lens when I take pictures so.... 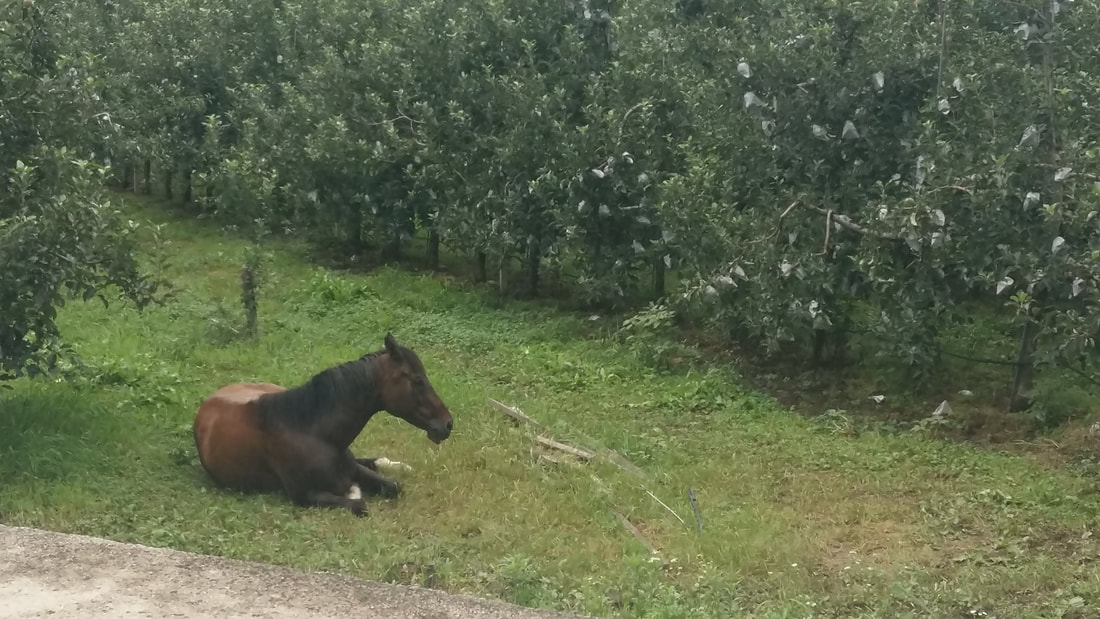