Info about Horseback Riding in Korea

How much does horse riding in Korea cost?

Riders are generally expected to have their own boots and helmet.

Government funded facilities: There are a handful of government facilities around Korea, but you will need to be able to speak Korean or have someone who can to set up the riding. In Sangju the cost to ride was 30,000 won (roughly $30 USD) for 45 minutes. This price may vary by location though. Since most stables close at 6pm in Korea, weekends are very busy. Generally, weekend riding is reserved for riders who attend weekly. All legal stables are required to be closed on Mondays.

Seoul : around a dollar and fifty cents per minute and up.

Riding in South Korea my be very different from your previous experience. Horses are often groomed and saddled, and then presented to you at the mounting block. Riders are then taken to a circular track. Below are pictures of a variety of riding tracks.

Where can I trail ride?

Jeju Island is the best source of easily accessible trail riding. There are also a handful of trails at stables on the mainland, some of which require full membership.

I was told I'm too fat to ride/ Was told I'd have to pay extra because of my weight. Have you ever heard of this?

Me too. Many stables have a max weight of 80 kilos, though a few will accept riders of 90 kilos. If you weigh over that you can't ride or you have to pay more to ride a Warmblood. Setting up a ride and not asking will probably cost you a lot of time (unless you rented a car.) If you think, "I'll just show up, and what can they do?" be prepared to be hear "no." Koreans will tell you straight to your face that you're too fat. Its not considered rude. I'm a plus sized rider myself, but I have to commend Koreans for being firm on not overloading the horses.

Can I come ride with you? Do you offer any riding?

Yes. We open next year.

I was told I have to buy insurance to ride?

Yes. It's a real thing. When I paid it years ago it was 30,000 won ($30.00 usd) for six months or a year. I don't remember exactly. Other times I think it was included in the membership fees. I don't know how it will work for Happy Horse until the stable's has a license and can be insured.

Can I get an equestrian job in Korea?

What's it like to own a horse in Korea?

Boarding in Korea is called hotel. The hotel fees in and around Seoul run about 1.5 million won or $1500 USD a month and up. Outside of Seoul it can be as low as $700 USD.

Most imported feeds cost about $50.00 USD a bag. There are only a few grain suppliers for horses in Korea. For a while there were two. We initially put Super on Bailey's racehorse mix because, well, there weren't any pleasure mixes. Then we tried Red Mills. We liked this a lot. It was cooked, seemed to put on weight better and had a lower ratio of oats.

Being budget conscious, we tried some of the cheaper feeds. The cheapest feed (outside of cow pellets-- cow pellets are dangerous because much of the food includes medication/supplements not safe for horses. Unadulterated cow feed is safe as long as it is processed in a closed mill. That's a mill where no medicated feed is processed. Closed milling is unlikely in South Korea. ) was equivalent to $20.00 a bag. It was made of one grain source , which I think was millet. We eventually settled on a brand that is manufactured here in Korea. The recipe was designed by the University of Kentucky. I'll get a picture of it one of these days. It's really good stuff, but even though its manufactured here, most of the grains are imported so it's still $50.00 a bag.

We had a lot of false starts here as well. In the beginning the only hay our dealer carried was alfalfa, which isn't really a hay. Its a legume...well, a bean. Thankfully, Super was not inclined to founder on it. Nevertheless, we faced a major problem as his body score rocketed from from a 3 to an 8.

Probably because my friend asked about Timothy every time we bought alfalfa, our hay dealer imported some. It came from France. First cutting. By that time we had Thunder and she had showed signs of laminitis from her track days. Even though the Timothy was good for her, she snubbed it, preferring Alfalfa or nothing at all. Thus began our battle with getting her weight up.

As her stomach stretched she started eating more Timothy, but it took six months for her to start eating like a horse. Now she eats four double compressed flakes of Canadian Timothy, and shares a bale of French Timothy (it got left out in the Sun, so it's not as good as it was imported, but it gives the kids something to eat between meals.) with the boys, two kilos of sweet feed and two supplements, one for joints and one for her hooves.

Thor and Super are on diets.. Thor struggled to put his weight on for about 4 months, but after he crossed over to chunky monkey land, we've struggled to keep him from eating too much. Both Thor and Super gets half a kilo of grain once a day, two flakes of Canadian hay, and we've had to reduce the French hay, because they're overweight.

Our horses get an hour of grazing a few times a week-- this partly due to renovations and partly to keep the horses from grazing down all the grass. And mostly because Liz and I have full time jobs. We loose them wherever there is some grass and just keep an eye on them.

However, there is a parasite that is unique to South Korea that has neurological symptoms similar to EMP which is why many people don't graze their horses at all. Our feed dealer had a horse die from it September of 2018. She was a pretty gray hunter type. My friend and I really wanted to do something for her, but there was nothing to do.

Anyway, we worm once a month throughout the Summer per the vet's recommendation. He did not say don't let them eat at all, just worm them. Many new stables are being built with pastures and paddocks, which suggests to me that, while warmers are are not specific for this parasite,their increased availability has lead changes in horses management for the better of horses.

Farriers aren't too expensive. It's about $120 for a set of shoes. I'm a fan of keeping horses barefoot, but I leave the door open for shoes. The thing is, you have to go barefoot for about a year to really tell. Least, that's been my experience.  Thankfully, our farrier truly loves horses. His job here is very dangerous because, well, most horses aren't good about their feet. We are lucky and thankful that our farrier is willing to come to our farm for three barefoot trims. Even more than that, he's been studying up on natural hoof care. We're his only clients that do this, but he's seen Thunder's hooves change from visibly having been foundered to looking like nothing happened at all. Lastly, he loves our horses. He worries about them. It's funny, but everybody seems to worry about them.

South Korea's population is highly educated. There is no shortage of vets. The odds of large animal vets dealing with horses is high on Jeju island, but the mainland vets that deal with large animals will see cows and pigs regularly and maybe one horse in their lifetime. The standard farm call is $200 plus treatment costs. Overall, the equine industry here is strong enough to support one clinic that specializes in horses.

Thus we are very, very lucky that our feed dealer convinced our vet to come see our horses. We are are two hours away from Seoul on a good day. Coming to us means passing on other work for at least half a day, or even a whole day because traffic in and around Seoul is awful. (Random link to make my point.) But he came to float our horse's teeth, and then came again when Thunder got a blood clot in her hoof. We cannot call the equine hospital directly. They will tell us we are too far out, but if we send videos/photos and he feels he should come, he will come. Otherwise he tells us what to do and which medicine to give. This works because Liz's dad is a pharmacist and he registrred to buy medication for animals. 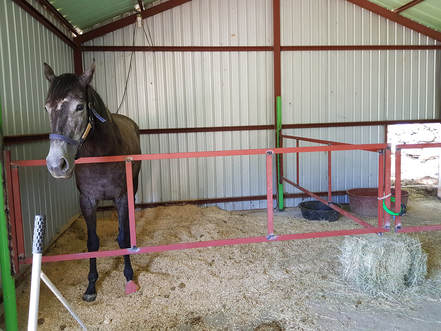 This is a photo of the stalls our welder devised for us when thunder had a blood clot in her hoof. Notice the bike chain functioning as a closure apparatus. Also, the barn does not look like this any more.